All of our Fair Isle Socks are available in Regular and Long Lengths.  Our socks are beautifully soft and comfortable. We have a Vast array of colours. Ours socks are 75% Wool 25% Polyamide.
Wash at 40 degrees. No Tumble Dry

For information on any of our socks, please email rachel@grangecraft.com

Fair Isle is a traditional knitting technique used to create patterns with multiple colours which originated in the shetland island.

Fair Isle knitting gained considerable popularity when the Prince of Wales (later Edward VIII) wore Fair Isle jumpers in public in 1921. Traditional Fair Isle patterns have a limited palette of five or so colours, use only two colours per row.

When Fair Isle is being knitted it is in the round and limit the length of a run of any particular colour. Some people use the term "Fair Isle" to refer to any colourwork knitting. Stitches knitted alternately in various colours, with the unused colours stranded across the back of the work. Others use the term "stranded colourwork".

For the generic technique, and reserve the term "Fair Isle" for the characteristic patterns of the Shetland Islands. Other techniques for knitting in colour include intarsia, slip-stitch colour (also known as mosaic knitting).

Two Colour Fair Isle Basic two-colour Fair Isle requires no new techniques beyond the basic knit stitch. At each knit stitch, there are two available "active" colours of yarn. One piece of yarn drawn through to make the knit stitch, and the other is simply held behind the piece, carried as a loose strand of yarn behind the just-made stitch. To avoid "loose" strands larger than 3-5 stitches, the yarn not in use can be "caught" by the yarn in use without this being seen on the front of the work.

Styles Knitters who are comfortable with both English style and Continental style knitting can carry one colour with their right hand and one with their left. Although it is also possible to simply use two different fingers for the two colours of yarn and knit both using the same style. The simplest Fair Isle pattern uses circular or double pointed needles, cast on any number of stitches.

Knitting then continues round and round, with the colours alternated every stitch. If the pattern starts with an even number of stitches, you will get a vertically striped tube of fabric. While an odd number will create a diagonal grid that appears to mix the two colours.

Traditional Fair Isle patterns normally had no more than two or three consecutive stitches of any given colour. Because of stranding and too many consecutive stitches of one colour means a very long strand of the other, quite easy to catch with a finger or button. Woven Fair Isle is a more modern variation. Where the unused strand is held in slightly different positions relative to the needles and thereby woven into the fabric. Still invisible from the front, but trapped closely against the back of the piece.

This permits a nearly limitless variety of patterns with considerably larger blocks of colour. Traditionally, Fair Isle jumper construction involves knitting the body of the jumper completely in the round. Steeks (from the Scottish word meaning 'stitch', 'to close shut', and comprising several stitches) across to the armhole openings allowing the body to complete in the round without interruption. Since the 1990s, the term "Fair Isle" has been applied very generally and loosely to any stranded colour knitting regardless of its relation to the knitting of Fair Isle or any of the other Shetland Islands.

One of our popular socks Pink Rose 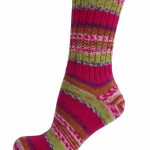